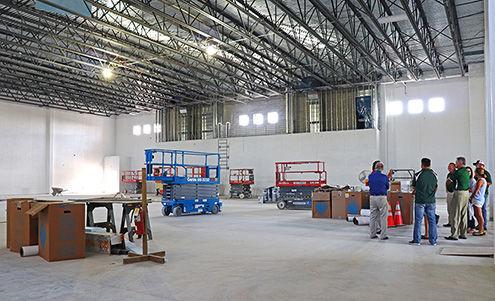 The Aransas County Independent School District (ACISD) Board of Trustees took a first look inside the Competition Gym being built next door to the Green Gym Tuesday, July 30.

WKMC Architects Vice President/Principal Bill Wilson led trustees on an in-depth tour and shared much of the progress that’s been made so far.

ACISD Superintendent Joseph Patek has been very satisfied with the progress of the facility.

“I’m really pleased with the progress of the new gym,” said Patek. “We’ve been monitoring it on a weekly basis. Every Thursday we have 8:30 a.m. construction meetings and things have been going well.”

“Construction by nature is very labor-intensive, it takes a lot of guys out here working and things have to be done in sequence,” said Wilson. “We’re finally to the point where lot’s of folks can be working simultaneously so the visible progress should speed up, particularly on the interior.”

Wilson also said the project is coming in well under the budget that was authorized.

“We’re always happy to do that and owners are always very happy to have that happen,” said Wilson.

Wilson says the positive relationship between ACISD, WKMC Architects, and Teal Construction is a big reason why construction has moved along very well.

Patek echoed these sentiments and said communication between the three parties has been exceptional.

“We’ve had an outstanding relationship,” said Patek. “Teal’s been very sensitive to our needs and their owner, Mr. Murray (John), he lives here so he’s taken special ownership of this project. He checks up on it a lot himself and makes sure it’s going according to schedule. He even provides some extra touches to the building that we don’t even know about until a few months later.”

Trustees were able to view in-person some of the gym’s key features such as large public restrooms, spacious concession stand area, openings for large glass window panes to be installed between the concession area and court where visitors can continue to watch the game while waiting in line, and the volleyball/basketball court area.

An area of the new gym that was scrapped in early designs to stay within budget was locker rooms. Both home and visiting teams for volleyball and basketball games will continue to use locker rooms in the Green Gym.

“It’s (locker rooms) something we know is a need, and it will be addressed in the future,” said ACISD Director of Operational Services Norm Spears.

Spears added that he hopes to implement a concept he calls Phase Two of the Competition Gym, which will include the addition of locker rooms and coaches’ offices to be built in between the Competition and Green Gym.

“The second phase is a concept,” said Spears. “We would get an architect to draw the plans based on our needs and we’ll bring it to the board to let them decide. We’ll have a price tag on it, and we’ll have to figure out where we’ll get the funds to do it.”

Patek said that the Ellen Show is planning a return trip for one of their shows to showcase the gym, at, or around completion time.

Nonetheless, if Ellen Show representatives do not return before 100% completion, the ACISD will plan an event of its own to celebrate and commemorate the gym opening.

“This gym is going to be something really special,” said Patek.

The Aransas County Independent School District (ACISD) Board of Trustees took a first look inside the Competition Gym being built next door to the Green Gym Tuesday, July 30.